Days 13 and 20 of #AuthorConfession on Twitter are intertwined in the #WheelerNovel series.

Felix Lalonde isn’t a villain in the traditional sense. I don’t see him curing his mustache with maniacal laughter.

He’s the antagonist, an obstacle to Loren’s goal of leading her team to a winning season. Felix wants that as well – he’s the team’s coach  – but he also wants HER and his attempts to seduce her cause Loren to go on the defense around him.

But she’s also torn; on one hand, Felix knows how to push her, mentally and physically, to help her win, as he did in Stage 1 of the Aviva Women’s Tour in Wheeler:

Loren didn’t let up on the descent, bursting from the tree-lined road into the open flats near the coastline. The wind hit her then, pushing her bike across the road like a sailboat. Even as her muscles burned with the effort, it felt like she was barely moving. She groaned as sweet relief came when she turned a corner and dove back into the cover of the trees. There was no chance for rest as Felix began yelling in her ear.
“Are you going to whine about it or win? You will not back off!” She curled her lip and shifted gears to hammer into the pedals.

But, Felix just can’t keep his hands to himself.

“Seventeen seconds.” He blew out a breath. “I know you’re hurting, but I thought perhaps we could have dinner together, to discuss our strategy for tomorrow. There’s a quaint bistro near the hotel. After you’ve cleaned up, of course.” He moved his left hand off the gear lever and placed it on her thigh, his fingers caressing her skin. It took a few seconds for her brain to shut down the physical response of her body.
“What do you think you’re doing?” She moved his hand back to the gear lever and returned her seat back to upright.
“Don’t be like that, mon tresor,” he murmured. “You enjoyed my touch once.”
Loren clenched her jaw. “How many fucking times do I have to say it? I don’t want you,” she growled. “You think I’ve forgotten what you did to me?”
He glanced over, his brows together. “What I did? All I did was try to make you happy. You loved me once, I know you did.” He returned his hand to her thigh, a little higher this time, slowly moving up as he spoke. “I remember the time when–.” She flinched at the rush of heat from his touch.
“Stop it, stop it!” She grabbed his ring finger to pull it back and off her leg. “STOP THE FUCKING CAR!”
“What? OW!”
“Stop the car, or I’ll break your fucking hand,” she hissed, and he promptly pulled over to the side of the road.

Then again, Loren needs him:

She collapsed to her hands and knees, trembling and spitting up blood. Strong arms encouraged her to sit back on her heels, and gentle fingers unclasped her helmet.
“Bouge lentement. Easy now.” Felix put his arm around her waist to help her stand.
“Leave me alone. I’m fine,” she mumbled, weakly pushing at him, but he scooped her up in his arms.
“You are not fine, ma bien adoré,” he whispered and carried her to where the ambulance waited. A paramedic plucked her out of his arms to lay her on the stretcher, but she fought against another who was attempting to clamp a neck brace around her throat.
“Let them help you,” he told her,
“Please, please don’t leave me,” she whimpered as his hand slipped from her grasp, but his dark eyes never strayed.

Their story continues in Wheeler: In Darkness, There is Still Light, where Felix tries to redeem himself in Loren’s eyes.

Or will redemption come at too high a price? 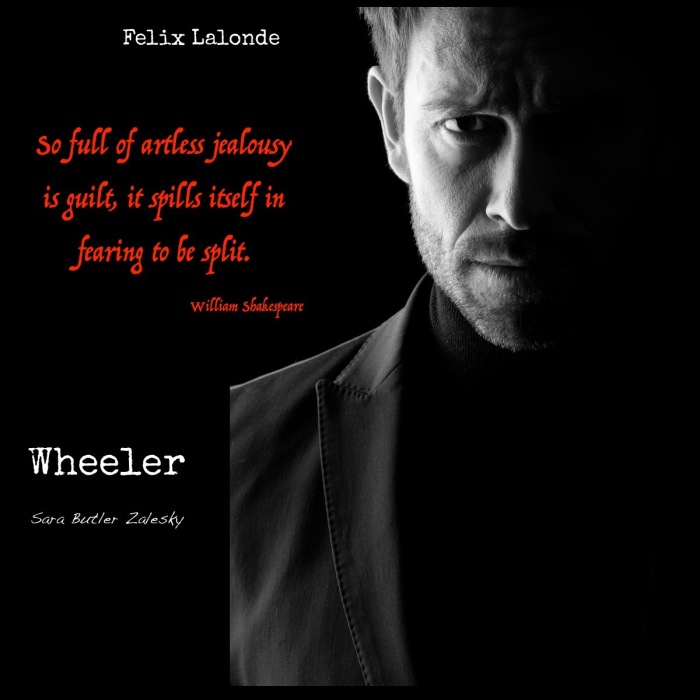