Buy a copy of Wheeler: In Darkness, There is Still Light HERE 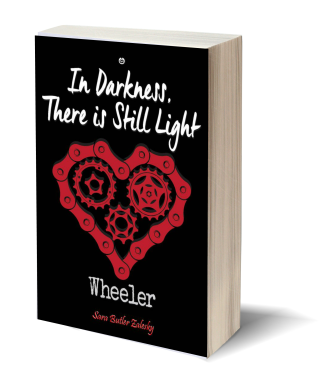 The Church Pub was packed for a Tuesday night as Loren, Cece, and Holly entered the  kitchen. Anthony was a maestro, directing the chaos of the cooks and servers, and he waved them toward his office.

“Where do you need us?” she asked him as he sat down behind his desk.

“I need Cece in the kitchen, she has the most experience,” he said then smirked as Loren stuck out her tongue at him. “You and Holly can help Nigel behind the bar. It’s going to be a brisk night. The Refinements are playing.”

“Oh, boy,” Loren muttered, and Holly turned to her.

“A local ska band,” she said, as they left the office. “They’re great, but it’s going to get a little loud.”

“Oh, boy is right!” Holly laughed as she pushed open the swinging door.

As the night went on, Loren found herself smiling more and more. The music and atmosphere lifted her spirits, and she didn’t mind the few times she was recognized. Her honor guard of regulars kept to their seats around the bar, discouraging any further conversation past a drink order. When the bar closed just after midnight and cleanup began, she was surprised to feel a little disappointed. After gathering up the trash, she grabbed two bags and turned to the barkeep.

“Nige, I’m going to take these to the dumpster.”

“Alright, but mind steps. The light’s out over the door,” he replied. “I saw it earlier and told Anthony. I’ll replace it in the morning.”

“Got it,” she said and backed through the swinging doors of the kitchen. Anthony was writing out the next day’s menu on the blackboard.

“Hey, be careful going out there. The light’s out over the stairs,” he told her as she passed.

“Yah, yah, Nige just told me,” she groused and pushed open the door to the alley behind the pub. It was darker than she expected as she stepped down and the door closed behind her. The dumpster was lit by a street light shining from the parking lot on the other side of a eight-foot wall. While it was bright enough to get there, shadows clung to the walls for the length of the narrow alley. Loren pitched the bags into the bin and started to the door when a voice came out of the dark.

“Aren’t you that bird fucking some actor?”

She froze. Her mind raced through hundreds of scenarios, but each one ended with her getting hurt. Bad. I have to get past him. There’s no other way out.

“I saw you wiggling that sweet ass of yours on the TV,” the man sneered. A crunch of stone came from her left, and Loren took a slow step to the right. “My car’s just over the wall there. You gonna get me off in the back seat, too?” He laughed. “Fuck, I’m gettin’ a stiffy just thinking about it.”

She could only see a hulking silhouette from the street light several yards behind him. The door to the Church was just fifteen feet away.

Big sprint. She balled her fists. Three, two, one. She took off, intent on the door, but his reach was longer than she anticipated. He seized her left arm painfully tight and yanked her to his chest.

She eyed the man through half-closed lids. Plaid shirt. Big muscles. Slicked back hair. Big nose. Not English. His breath was thick with onions and lager as he pressed his mouth against her cheek.

“Where do you think you’re going, pretty girl? Daddy wants some sugar.”

His taunt lit the fuse of her rage. “You do not get to touch me!” She clutched at his shoulder, digging her thumb into the hollow of his clavicle. His bellow echoed off the bricks but was cut short by her knee applied to his groin. Loren readied to jab at his throat with her pointed knuckles when the back door opened and the alley was flooded with light.

The man shoved her away. Her trainers slipped on the damp cobbles and pain shot up from her elbow as she fell to the stones. Shouts and running feet echoed in her ears when a hand touched her shoulder. She yelped and turned, fists swinging. Anthony backed away with his hands raised.

“It’s alright, he’s gone now.” Anthony brushed her hair out of her face. “Hey, I’d like to be all chivalrous, but I need your help to get up.”