His mind sluggishly rolled over, and he blinked at the therapist. The rest of the room then began to come into focus. Beige walls, dark wood office furniture. A man with glasses perched on the end of his nose, staring at him.

He heaved a sigh. “What were you saying?”

“We were discussing why you have requested a transfer to inpatient treatment,” the man replied, flipping through a file on the desk in front of him. “You state you’ve had difficulty staying sober in outpatient treatment.”

“What else have I to do?” he sneered, anger rousing him. “I have no income; I have no life. Everything has been taken from me.”

“It was a misunderstanding,” Felix snapped back.

“And what was it you misunderstood?”

He sat up straight. “I misunderstood? I merely wished to speak to her; to reason with her.” The man’s eyes held no emotion behind his glasses. Trying to manipulate him wasn’t going to work.

“What did you want Ms. Mackenzie to know?”

“She should be with me, not that actor!” He leaned toward the man. “He pretends to love her, but he could never know her the way I do. She and I are the same. We lived through the same hell.”

The therapist folded his hands before him. “And what kind of hell?”

“It matters not.” Felix turned away, folding his arms over his chest. “It changes nothing.”

“Why did you go to her house?”

Leave me alone, you imbecile. “It was as I told you before. My contract was terminated. I was distraught. I needed to talk to her.”

“I drank anything I could get my hands on. I just wanted to drown. I needed her.” She was there, standing before him with fear in her beautiful gray eyes. “It hurt to see her, and when she told me to leave, I went mad. I grabbed her arm, and she hit me.” He lifted his head to the therapist. “The next thing I recall is being in hospital, in handcuffs.”

“You don’t remember striking her? Choking her?”

“I don’t know,” he murmured. “I see flashes of her face in my dreams and a terrible darkness pressing on my skull.” Felix closed his eyes, wiping his mouth with a shaking hand.

“And yet you have accepted a plea agreement.”

“I just want this to be over,” he muttered, pinching the bridge of his nose.

The therapist cleared his throat. “You’ve been sober for twenty-four hours. The difficult time has only just begun,” he said. “You’re in the right place if your goal is recovery, but you must work the program, or you will end up in prison. Do you understand? This is your last chance.”

“Yes,” Felix choked. “I swear, I never meant to hurt her. I love her.” His eyes slid away. I cannot go back to that hell.

Buy a copy of Wheeler: In Darkness, There is Still Light HERE 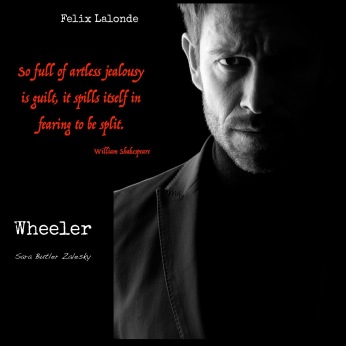 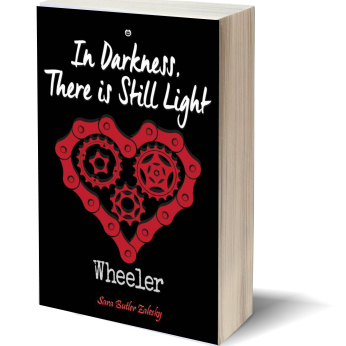