In Wheeler, Graham watches an interview Loren gave shortly before they met, for the Aviva Women’s Tour by SkyNews reporter, Sylvia Montgomery. He tells her it gave him a fair bit of insight into her character. When Loren watches the interview herself, however, it’s very different than what she remembers.

The following interview is one of the darlings my editor, Jessica and I killed. 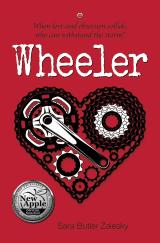 “This is Sylvia Montgomery, reporting for SkyNews. I’m here with Loren Mackenzie of Innovative Design Cycling, as they gear up for the Aviva Women’s Tour beginning on 17 June in Bury St. Edmunds.” She turned her faded green eyes to her. “Loren, thank you for taking the time out of your training to meet with me today.”

“Glad to do it.” She tightly folded her sweaty hands in her lap.

“It’s quite exciting, racing in the second year of the Tour.” Sylvia nodded her head, signaling Loren to respond. She sat up straight.

“Yes, we are very excited. A few of us raced the inaugural tour last year,” she replied. “We’re even more thrilled with Stage 4 in our backyard, in Waltham Cross.”

“Yes, I’m sure!” Sylvia laughed a bit too hard. “The organizers are anticipating a greater turnout of spectators than last year.”

“Hearing the cheers and cowbells as we pass really gives us a boost,” Loren said, smiling. “It’s been amazing to see how the Women’s Tour, and women’s cycling in general, has grown across Europe and the US in the last few years.”

Sylvia shuffled her papers. “Looking over the course maps, the feeling is that every stage may boil down to a bunch sprint. Is that your feeling as well?”

“Well, unless there’s a breakaway that sticks, I think the organizers are keen to the drama,” she replied. “It helps that the races will be televised and live streamed on the ‘net. It’s a shame more organizers don’t do that.”

“Yes, I’m sure,” Sylvia drawled. “So, you do feel this Tour is more suited to the sprinters’ teams?”

“I think there will be more opportunities in each stage,” Loren answered. “But, I think the field will be open to any strong rider, not just the sprinters. There’s definitely going to be an aggressive tone to the Tour.” Sylvia nodded but paused before asking her next question.

“You are known for being an aggressive rider, Loren. I’m sure you have some ambitions for the Tour.”

Loren glanced at the camera. “As a team, we have a plan, but if an opportunity falls in my lap, I won’t pass it up.”

“As an American riding with a British team, do you think there will be any tension with the USA’s International team?”

Loren raised an eyebrow. Where’s she going with this? She purposefully took a few seconds before she responded. “I’m sure there’ll be some good-natured ribbing, but we all know each other quite well.”

“As the only American on the team, I’m sure there are times when you feel like the odd-man out.”

Loren tilted her head slightly and smiled. “Sometimes, but I’ve lived in England long enough to be used to driving on the wrong side of the road.”

Sylvia chuckled. “Have there been any conflicts between yourself and your teammates, now that you’ve been promoted to team leader?”

Loren stared at the reporter for a moment. “My role hasn’t changed. It’s just a title, and I expect my teammates will be just as candid with me now as they’ve always been.”

“Family support is important in any career. I understand you lost your parents at an early age.” Loren nodded, and Sylvia continued. “How have you been able to acclimate to living abroad without having a solid home base?”

Loren blinked. “I’m sorry, I don’t understand your question. My parents may have died but I wasn’t Oliver Twist.”

“It’s just a question,” the reporter backpedaled. “You don’t have to answer.”

And you’ll just make up your own answer, I suppose. She looked down at her hands. “I’m very fortunate to have been adopted twice in my life. First, by my aunt and uncle after my parents died, and then by my friend, Miriam, and her family here in Enfield. I’m beyond grateful for their love and support.” Sylvia nodded, a sympathetic smile pulling at her tight skin.

“Some would say you don’t have a traditional cyclist’s figure. You’re a bit more, um, curvaceous than most of your teammates.” The abrupt change in topic threw her for a second and Loren sat up taller.

“Women come in all different shapes and sizes. There’s not one body type that’s dominant.”

“I eat whatever my soigneur tells me to eat.” Her eyes slid away. “But that can get tedious sometimes.”

“No treats or goodies you especially like?” Sylvia leaned in slightly and Loren ducked her chin.

“Well, I love pizza too much to give it up entirely. And Oreos.” She shrugged a shoulder and the reporter chuckled.

“With you being so busy traveling and racing, I’m sure it’s hard to keep up relationships outside of the sport. Do you have a boyfriend or significant other?”

Loren rocked back in her chair. “I don’t have time for that,” she blurted, then cringed internally.

Sylvia tittered. “Thank you for your candid responses, Loren. I think that’s enough for now.”

“Ah, okay.” Loren stood up and removed the wireless mic from her jersey. She nodded to the cameraman as she left the conference room only to walk straight into Cece out in the hall.

“Hey!” Cece pushed her back.

“She got a little too personal.” Loren pursed her lips. “I think she said I was fat.”

Cece snorted. “If she thinks you’re fat, all that Botox has gone to her brain!”

Your copy of Wheeler is waiting for you at Amazon  and Kobo, Nook and other retailers through Books2Read