While I was working with an editor on Wheeler, the phrase ‘head hopping’ kept coming up again and again, but I had no idea to what she was referring. Being new to this thing called writing, my only experience was what I read from other authors. I’m a prolific reader, from sci/fi, fantasy, romance, YA, thrillers, anything I could get my hands on, I read. I hadn’t noticed the difference between hearing the inner thoughts of the characters, I was either fully engrossed or I couldn’t get past the first chapter.

To me, head hopping was hearing both (or all) of the characters’ inner thoughts in a scene, not necessarily what they were seeing or even feeling to a certain extent. What I began to realize was that a vast majority of the novels I read had the narrator telling me what the characters were thinking and feeling.

According to the many, many articles and blog posts I’ve read since, there is no hard and fast rule, only the elusive ‘guideline.’ Some famous novelists head-hop all over the place. Some are a bit, um, vehement about not doing it.

The Editor’s Blog says: ‘Head-hopping is what happens to the reader when a writer suddenly changes the viewpoint of a character or POV. Experiencing the mind and heart of one character for a moment only to be forced to switch focus to another character a paragraph or two later, is disconcerting.’

Then I read Randy Ingermanson’s blog on the subject and I became even more confused.

“Randy sez:  Let’s define terms. “Head-hopping” is the practice of switching point-of-view characters within a single scene. This is not the same as the omniscient point-of-view, which would allow your narrator to know things that none of the characters know.”

But then the points being made by Randy were eclipsed by what was being said in the comments, specifically:

“If it’s about a person, don’t head hop, if it’s about the relationship or bigger picture, head hop.”

“Skilled writers don’t need it (head hopping) to convey the other person’s emotions through showing.”

I then found Ciara Ballintyne‘s post on the subject, and this is probably the clearest explanation, along with a great flowchart: 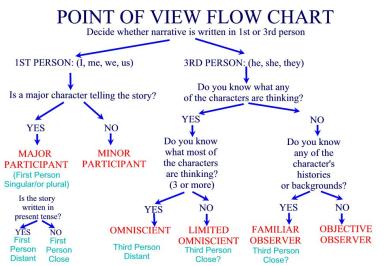 And that’s when my brain exploded. But I’ll give you an example of my problem:

Graham removed his sunglasses and observed the girl struggling with the bicycle wheel. The corner of his mouth went up as a bit of cleavage showed when she bent over to retrieve something she dropped. He cut the engine and got out to walk toward her, smothering a laugh as he heard her curse under her breath.

Grumbling, Loren had started over when out of the corner of her eye, the dark gray Jaguar that had almost gotten into an accident came to a stop a few yards away from her. You’ve got to be f**king kidding me. She didn’t look up when the car door opened. I’m not some f**king damsel in need of saving “… you prat.” She froze at his stifled chuckle. Did I say that out loud?

There’s no separation of POV, it just flows back and forth between the two AND you hear their internal thoughts. Now, in the final version, Graham has his own section separate from Loren’s POV. (And never the twain shall meet unless I want it! Hazzah!)

“Oh shit!” He swerved back into his lane to avoid a collision with the lorry, but his eyes snapped up to the rear view mirror and the woman on the stone fence. Perhaps I should stop. She looks like she could use some help. He pressed his lips together and set his focus back on the road ahead. As he waited his turn to cross an intersection not far down the lane, he draped his arm over the passenger seat and looked back. It’s not like I haven’t stopped to help before. There was that charming older couple last month. Then again, she could be completely mental.

Graham shook his head. “Like she can follow me home on a bicycle,” he muttered and made a three-point turn in the middle of the road to head back.

Loren’s head came up at the blaring truck horn to see a gray Jaguar swerve out of its way. “Idiot,” she grumbled and went back to trying to force the hard rubber tire over the edge of the wheel.

A few minutes passed with her wrestling with the tire when, out of the corner of her eye, she saw the same gray Jaguar came to a stop a few yards away from her. You’ve got to be f**king kidding me. She didn’t look up when she heard the car door close. I’m not some f**king damsel in need of saving “… you prat.” She froze at his stifled chuckle. Did I say that out loud?

I didn’t like it at first. It was different than the way I had been writing for the past 15 months. I didn’t like the hard breaks in the text interrupting what I thought was flow. But, I had to admit that my now fired editor was right. Yes, the first version was ‘good enough,’ but it was high school. The second, obviously changed to reflect the final version, was not only shorter, it was better. Focused. Adult.

As dive into revising the follow up novel, I’ve applied what I learned and it’s changed the way I write now. A little head hopping might sneak in every so often, but now it is done on purpose and only in very specific scenes.

I think this time I’ve created something that I can be proud to say, “I wrote this.”

2 thoughts on “Head Hopping: Messing up the art of character point of view”