I’ve had cats for most of my life. They’re my preferred pet, although I did have the best dog in the world when I was a teen.

The current two (Dori and Peachy) came to us about two years ago. They’re sisters, and like siblings, they fight… over me. Which is sweet, I kind of like being a prized possession. Because really, we humans aren’t anything more to them. 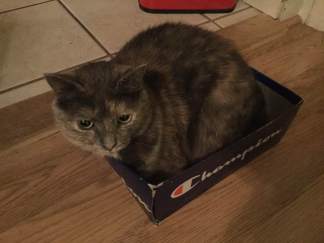 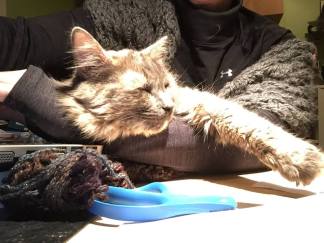 I’ve had other cats in my lifetime, Mitch, Cleo, Cory, Ranger, Frodo Baggins, Samwise Gamgee. (Becky was the dog)

Frodo was named so because my father, Jack, had a cat named Bilbo Baggins. Bilbo was an enormous black and white Persian – and mean, like how Bilbo was when he tried to take back the ring from Frodo in Rivendell.

Frodo was a black shorthair, except for a white tuft at his throat. I went to the end of my facebook timeline and couldn’t find a photo of him – which is sad because he was beautiful. He was neutered just before we adopted him and he was big – not fat, but Tomcat big. He was a good looking cat and knew it.

But we couldn’t have a Frodo without Samwise, of course. Although, Sammy hated Frodo. Like HATED. She was a rescue and the runt of her litter. She had been malnourished as a kitten and had misshapen paws. She didn’t like to be held, unlike Frodo, but if you happened to be sitting down anywhere, she would curl up next to you.

My two girls are like that. Peach is forever wanting to be held or fussed over. Dori is more aloof, but when she wants some attention, she will voice her wants quite loudly. She also can’t eat unless I pet her beforehand.

With Frodo, I didn’t often see how much hair was on my slacks. He was black. My slacks are black 99% of the time.

My current girls, well, they’re not black. They’re muted calico, which is all shades of gray and beige. Peachy has a coat like a Persian, long and fluffy and sheds like rain. Dori is a shorthair, with a fluffy undercoat, who also sheds like nobody’s business.

I never realize how much cat hair is on my black knit slacks until I go outside.  This is just a section, even after using a lint brush. 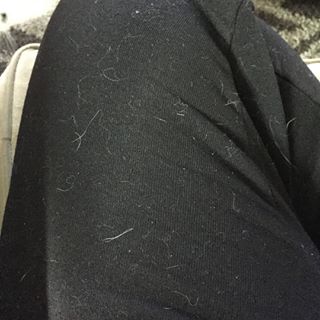 But really, it’s a badge of honor. I am adored by two non-human creatures who want to snuggle with me when I’m trying to sleep, write, eat, leave the house… or use the bathroom.

I’d love to hear about your pets!

2 thoughts on “I like cats, my black slacks, however…”